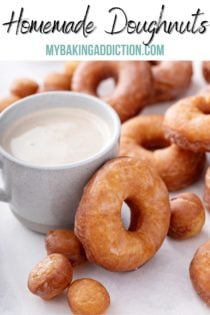 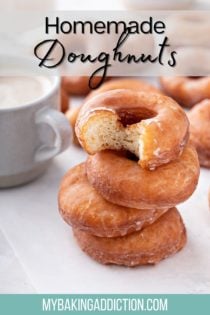 Does your family love fluffy yeast doughnuts on a weekend morning? Make these Homemade Doughnuts and surprise them all with the freshest glazed doughnuts and doughnut holes.

Believe it or not, I used to be totally intimidated by working with yeast. So there was a time when making homemade bread, much less homemade doughnuts, would never have happened.

But eventually I learned that working with yeast really isn’t scary at all. And truthfully, neither is deep frying!

There are just a few simple things to know along the way. With a little bit of confidence and some patience, you can serve your family delicious homemade doughnuts for breakfast this weekend!

The first time I ever tried making these homemade doughnuts, I was sure they’d be super complicated. I mean, there’s nothing more impressive than a fresh-from-the-fryer yeast doughnut!

But I decided to give it a try anyway and discovered that they aren’t hard to make at all!

Sure, they require more steps to make than, say, glazed donut muffins, but the steps themselves aren’t hard at all. And the result is fluffy, super-fresh glazed perfection.

And once you get the hang of frying donuts, you’ll be able to make recipes like apple cider donuts and chocolate glazed donuts like a pro.

Oh, and the best part? You can always make the dough for these the night before so you have less work to do in the morning!

HOW TO MAKE HOMEMADE DOUGHNUTS

The key to success here is making sure you have the right equipment for deep frying your homemade doughnuts.

In addition to a mixer and measuring cups and spoons for making the dough, you’ll need:

To get started, we will need to activate our yeast.

Warm the milk in the microwave in 30-second increments until it is quite warm but not hot. Add sugar and the yeast, then let it rest for about 10 minutes. The yeast has activated when it is bubbly/foamy on top.

While the yeast is activating, whisk together eggs and melted butter in a small bowl, and the flour and salt in another.

Add the egg mixture to the bowl of your stand mixer fitted with the dough hook, then pour in the yeast mixture and stir everything together until combined.

With the mixer on low, add the flour mixture in ¼-½ cup increments until all of the flour is gone. Turn the mixer to medium-low speed and let the mixer knead the dough for 5 whole minutes.

Scrape the sides and bottom of the bowl, turn on the mixer for 30 seconds, and then turn off the mixer and let the dough rest undisturbed for 10 minutes.

After the 10-minute rest, move the dough to a lightly oiled bowl and cover with plastic wrap. Let the dough rise for about 1 hour, until doubled in size.

When you’re ready to make your doughnuts, roll out the dough on a floured surface and roll it to ¼- to ⅓-inch thickness.

Use your doughnut cutter or a 3-inch round cutter to cut as many rounds as you can. Roll out the dough scraps and repeat as needed.

Place all of the cut doughnuts and holes on a floured baking sheet. Cover with a tea towel and let rise for at least 1 hour, although you may need to let them rise for 1 hour 15 minutes.

The doughnuts are ready to fry when they are visibly puffy and appear to be airy.

Now for the part that freaks everyone out; but it’s not too bad, I promise!

While the cut doughnuts finish rising, heat at least 1 quart of canola oil in your dutch oven until it reaches about 375°F. Don’t let it get hotter than 380°F!

Working with just a couple of doughnuts at a time, carefully ease the risen doughnuts into the oil. Let them cook for about 1 minute, then flip and cook for 1 minute more.

Use a slotted spoon or chopsticks to remove the doughnuts from the oil, letting any excess oil drip off before placing them on several layers of paper towels. Let them rest for a count of 5, then flip to a clean part of the paper towels. Move to a wire rack set over a rimmed baking sheet after another count of 5.

Repeat with remaining doughnuts and all of the holes. The holes will cook much more quickly than the doughnuts; you will probably only need about 30 seconds per side.

Allow doughnuts to slightly cool before glazing as desired.

If you’d like, you can prep the dough the night before so all you have to do in the morning is the cutting and frying.

After placing the dough into the oiled bowl, cover it tightly with plastic wrap and place the bowl in the refrigerator.

Refrigerate the dough overnight (for at least 8 hours). The next morning, go ahead with rolling out and cutting the dough and finishing the doughnuts as directed.

Still feeling intimidated by the idea of making fried homemade doughnuts? I’ve got a few tips for you to help set you up for success!

This recipe makes a classic glazed doughnut, but there are so many ways you can top your homemade doughnuts!

As soon as you glaze them, top them with sprinkles for a pop of color.

Use a chocolate glaze or strawberry glaze instead of the vanilla glaze.

After resting the hot doughnuts on the paper towels, dip them in cinnamon sugar instead of glazing them.

To make the doughnuts the same day:

To make the doughnuts the next day:

To Make the Doughnuts

To Fry the Doughnuts

Adapted from The Pioneer Woman.

As an Amazon Associate and member of other affiliate programs, I earn from qualifying purchases.