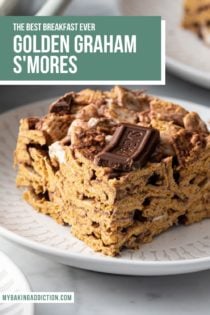 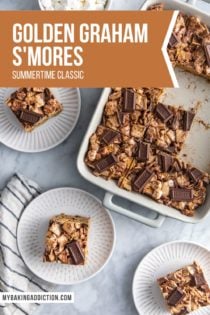 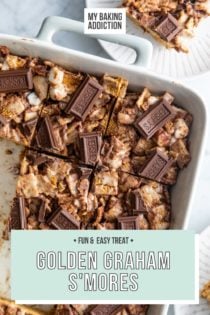 Golden graham s’mores are a delicious and simple combination of Golden Grahams cereal, mini marshmallows and milk chocolate. These simultaneously crunchy and chewy bars are a great no-bake treat for the whole family.

I have always had a thing for Rice Krispie Treats, which is pretty apparent if you take a look through the recipes here on My Baking Addiction.

In my opinion, there really is no easier or more delicious sweet treat than a combination of cereal and gooey, buttery marshmallows. It just works – which is why it’s been a crowd favorite for years.

WHAT ARE GOLDEN GRAHAM S’MORES?

When I was pregnant with Elle, Golden Grahams cereal and s’mores were two of my biggest cravings.

So you can imagine how excited I was when I learned, while in the middle of those cravings, that golden graham s’mores are a thing.

If you’ve never had a golden graham s’more, it’s like a cross between a s’more and a classic rice krispie treat. The base is made up of Golden Grahams cereal and the bars are packed with marshmallows and chocolate chips.

They’re golden grahams cereal treats taken to the next level.

The bars are crunchy from the cereal, gooey from the marshmallows, and are a fun twist on the campfire classic. Not to mention, they’re way more portable!

HOW TO MAKE GOLDEN GRAHAM S’MORES

Just about anyone could whip up these simple treats in no time. They would definitely be a fun recipe to make with kids during the summer!

With the exception of the butter, you can keep all of the ingredients for these bars in your pantry so you can make golden graham s’mores any time you like.

Do you have to use Golden Grahams brand cereal?

I always make these bars with the name-brand Golden Grahams cereal, but you don’t have to use the General Mills stuff!

There are a lot of companies making their own versions of graham cracker cereal these days, so feel free to use whichever one is your family’s preference.

Before you get started, thoroughly butter a 13×9-inch pan. You want to grease the pan so that the bars don’t stick and are easy to get out!

Grab a big saucepan or Dutch oven and and melt the butter over low heat, then add all but 1 cup of the mini marshmallows. Once the marshmallows are melted, remove the pan from the heat and add the vanilla.

Now it’s time to add the cereal, stirring until it is fully coated in the marshmallow mixture. Fold in the remaining marshmallows and the chocolate chips.

Use a buttered spatula or your hands sprayed with nonstick cooking spray to press the mixture into the pan and top with the Hershey’s bar pieces.

Let the bars cool before cutting them into squares and enjoying!

Store these bars the same way you would store chocolate rice krispie treats. Golden graham s’mores will keep for about a week when stored in an airtight container at room temperature.

If this fun, portable golden graham s’mores recipe has you craving more unique s’mores-inspired treats, I’ve got you covered! Check out any of these 8 recipes for ways to enjoy that classic graham cracker, chocolate, and marshmallow combo. 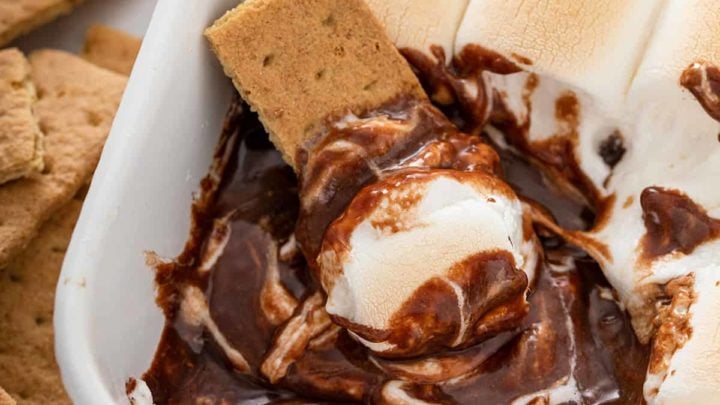 S’mores Dip is always a party favorite! Dig into this combo of melty chocolate and gooey, toasted marshmallows with graham crackers, fruit, or your favorite cookies. 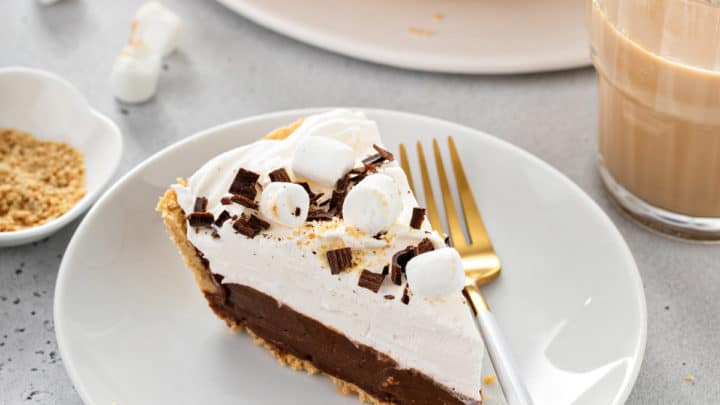 S’mores pie comes together in 10 minutes and is the perfect no-bake dessert for summer. Who could possibly resist a slice of this s’mores goodness? 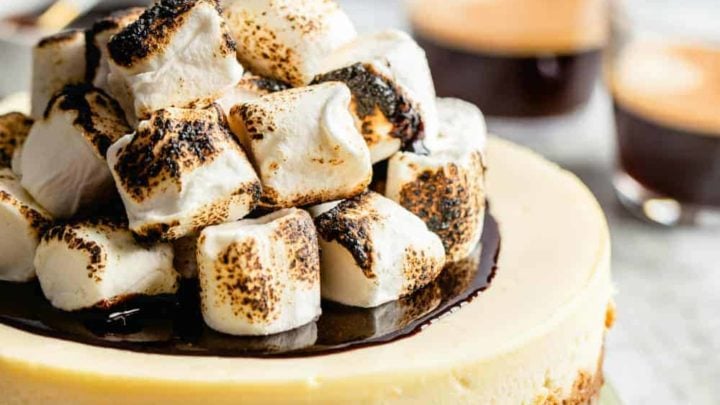 Say hello to this s’mores twist on a classic vanilla cheesecake! S’mores Cheesecake is creamy, decadent but with all the flavors of the classic campfire treat. 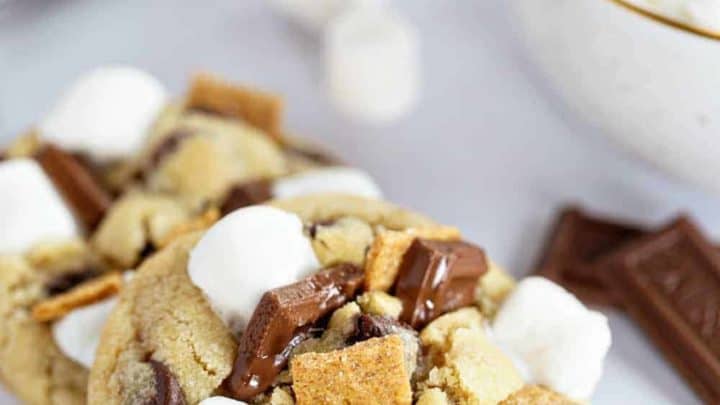 Get ready for your favorite campfire treat packed into a portable cookie! S’mores Cookies are sweet and chewy, stuffed with graham cracker pieces and chocolate chips and topped with gooey marshmallows. 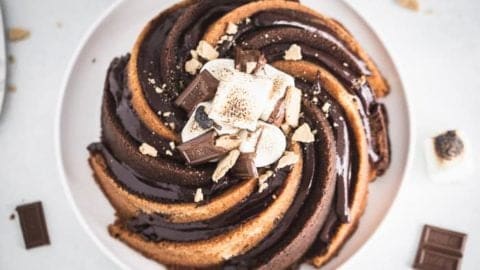 A sweet s’mores bundt cake that swirls graham cracker and chocolate batter in one pan. 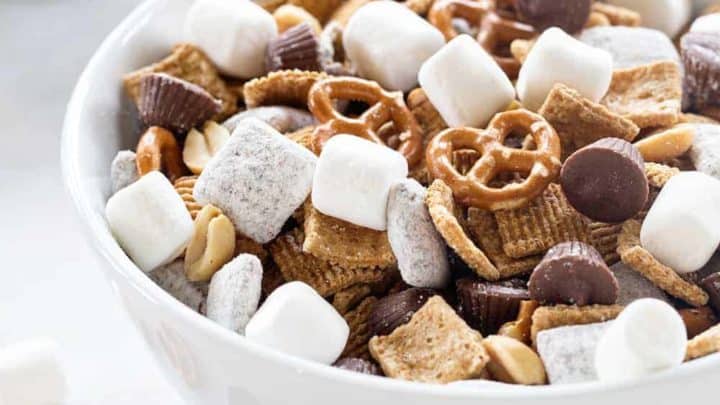 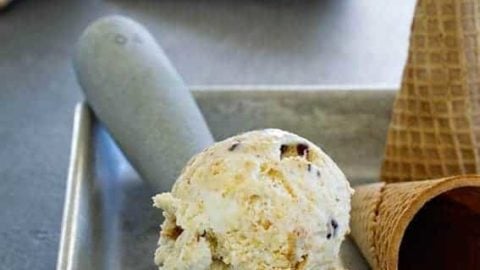 No-Churn S’mores Ice Cream is everything you love about that campfire treat, in frozen form. Chunks of milk chocolate bars, graham crackers, and melty marshmallows make this one incredible dessert. 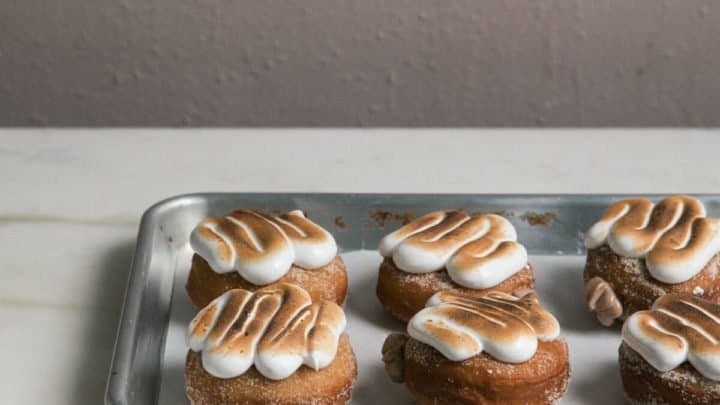